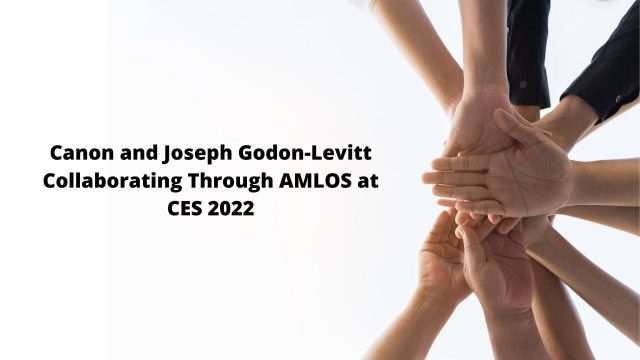 One of the key elements of Canon’s vision for 2022 is cooperation, which was the inspiration behind the TogetherNext theme. By focusing on collaboration efforts and varied relationships, Canon aims to bring the world together innovatively.

This company’s AMLOS product, a medium-sized camera mounted on the desk, is the driver for their 2022 targets. AMLOS means “Actuate My Line Of Sight,” allowing users to collaborate, record, and hold hyper-realistic virtual meetings.

Producer and actor Joseph Gordon-Levitt see the ingenuity and creativity of the company’s venture. Through the company HitRecord, Gordon-Levitt will conduct an all-digital Hybrid Writer’s Room with others who will try to make the idea of a short animated film.

Canon explains how AMLOS “is looking to help redefine how we see, engage and interact.” AMLOS will feature a Microsoft Teams integration, as also, it will provide the seamless connectivity of software.

With a few gestures similar to an arm wave, users can perform tasks such as calling off calls or adjusting the appearance of the gathering. Cameras will offer enhanced digital photography, meaning that those attending a meeting will communicate various images easily and conveniently.

Gordon-Levitt’s HitRecord production, in conjunction with Canon, will be released in the coming weeks after CES.

There’s no official date for the release of this Kokomo software. However, Canon plans to announce the date soon.

What is Eco-Design, and How Do We Put it into Practice?