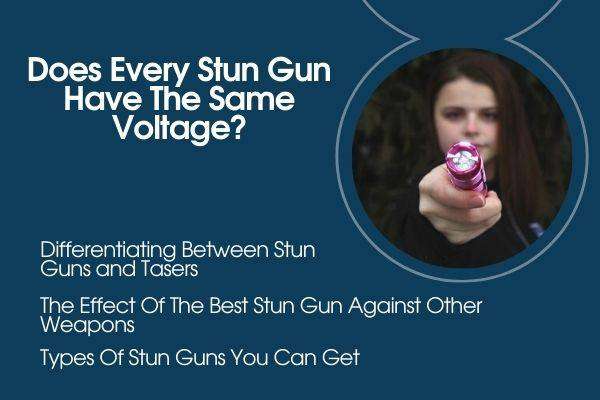 When you are looking for different weapons, there are plenty of options to go around. Some people would prefer something they have more control over. At the same time, some would instead get something that can do the job for them and not be too complicated. It is best for people who prefer the latter to use simple and effective weapons like stun guns. They are electroshock weapons that are push and hit and are easy to manage for the most part.

Some of you may like to know, does every stun gun have the same voltage? They can differ greatly depending on the kind of stun gun you get and where you get them. Some of them will be high voltage used by police and military officials. Others are not as high in voltage and can be used for street crime or minor scuffles. No matter what power they are at, stun guns are strong weapons to use for self-defense.

The whole idea of a good stun gun is to allow you to escape a bad situation with the as minor issue as possible. You must ensure you are well protected and out of the woods when you face someone dangerous. Stun guns are made to hinder your opponent and give you the time to get away safely.

You must find a stun gun with a voltage you can handle in a fight or altercation. The average voltage you get is somewhere between 500 volts to a maximum of 10 million volts. In that whole issue, the strength of the stun gun is more relevant to your use than what you need. If it is too high, you might overuse it on someone creating permanent damage or even hurt yourself.

Differentiating Between Stun Guns and Tasers

Someone who has only ever seen or heard of electroshock weapons in movies may not know this. There is a significant difference between stun guns and tasers and how they work. The use is also what makes them different, but mainly it is the making and the range. You can decide the kind of protection you are looking for to go for a stun gun or a taser. The basic differences are as follows:

Stun guns are direct contact electroshock weapons. They are made to be pushed against the body and be in contact with the skin or body. They are no use at a distance where they cannot touch the perpetrator.

Tasers, on the other hand, are long-range electroshock weapons. They are more than shoot and strike as they have wires in them that are projectile. These wires spring out and stick into the perpetrator’s skin, shocking them into a stupor. They can be shot out at great length and can also attack someone from a distance. If you are chasing someone or trying to keep your distance, a taser gun will work better than a stun gun.

Regarding the definitions and names, stun guns are the generic term for all electroshock weapons. On the other hand, Tasers are derived from the official name of the device, Tom A Swift Electric Rifle, named after a fictional gadget invented by Jack Cover. The company that produced that initial design was Taser International and has since become a household name.

Stun guns and tasers will serve differently depending on the kind of trouble you might run into. You should keep a stun gun if you seek protection from assault and kidnapping. You get a taser if you are in law enforcement or need crowd control from rioting. These devices are, of course, interchangeable, and you have to remember that you control them. It comes down to how you can handle them and what they can do for you.

The Effect Of The Best Stun Gun Against Other Weapons

Many people would argue that stun guns are not as effective as actual firearms or knives. People who can take care of themselves or don’t shy away from physical confrontation can take that option. Stun guns are made to help the helpless and give them the necessary fighting chance. Tasers cause temporary muscle disruption, paralysis, and limited mobility. In most street crime cases, using heavy-duty weapons like firearms can backfire and harm you. Tasers and stun guns don’t have any lasting impact on the person who experiences them, yet they work.

For women, the best stun gun is better than the best gun or dagger. They do not prefer to tackle their attackers or anyone who commits a crime against them. Especially in the assault, rape attempts, kidnapping, robbery, and pursuit, cheap stun guns have helped women a lot. In such cases, women can rely on strong, effective deterrents like stun guns to protect them.

Types Of Stun Guns You Can Get

Since the early 1980s, locating and buying stun guns from the market has become quite easy. It has become a regular self-defense weapon that many people opt for. More civilian-friendly options are available now, starting from the police stun gun, the most common one. You will find amazing new inventions in this area with passing time.

You will find a range of the best stun gun flashlight for nighttime use. It is great for campers and women to use against wild animals and wild humans. You will find a whole collection of mini-stun gun weapons when you think they can’t get smarter.

They are made to be used discreetly in public, don’t steal focus, and are super effective. In this category, you will find options like keychain stun guns, pen, and lipstick stun guns. They are specially made for vulnerable people and available at online stores. Now that safety is within reach and affordable, check out their impressive collection of the best stun guns.

How to Effectively Utilize Your Influencer Marketing Budget